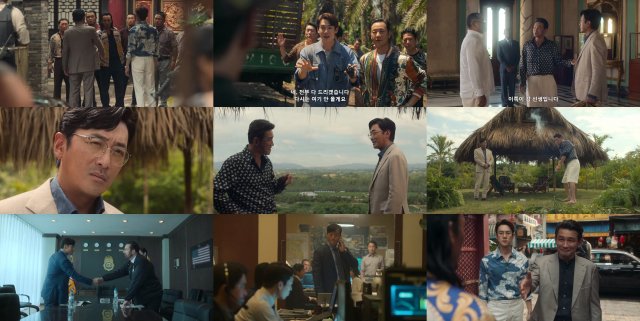 It's been ten days since Netfix released "Narco-Saints" to the world. The crime drama is doing OK, holding fourth place in the international charts on Netflix. This compares to sixth place for "Young Lady and Gentleman" which isn't even available in all regions though. Yesterday's individual number ones were an odd bunch too- Hong Kong, Saudi Arabia, South Korea, Taiwan, and the United Arab Emirates.

As far as actual plot goes, we appear to have wrapped around to the beginning of the drama, although maybe not quite yet. In-goo's just in a vehicle on his way to the jungle. There's probably lots of opportunity to do that when he's hanging out with a drug lord. Th drug deal goes bad because of the border patrol. Well, actually no, the drug deal goes bad because Pastor Jeon's bodyguard charges in guns blazing to pull off a rescue. Apparently the border patrol, rather than the DEA, interrupting the deal was all according to plan.

We then subsequently find out that Agent Choi hadn't even spoken to the DEA about any of this yet. And when he does finally do so, they refuse official involvement and insist that Agent Choi hires mercenaries to do the job so they have plausible deniability. At this point I'm firmly on the side of Agent Choi's superiors who observe him on the phone trying, and failing, to make a deal with Pastor Jeon and concluding that Agent Choi has no idea what he's doing.

Given that In-goo himsel thinks Agent Choi is clueless, and keeps threatening to start dealing drugs for real...I'm not sure any of these people are supposed to be wrong. "Narco-Saints" has this bad habit of going around in circles, with movement in the story being delayed mostly due to ambiguity and incompetence. The slow pacing really wrecks the plot twists- in this case, we learn that Agent Choi's brilliant plan to become Pastor Jeon's sole available distributor is wrecked when he decides to just make up with the Chinatown gang.

"Narco-Saints" has gone to great lengths to emphasize that Pastor Jeon is a sinister person. He bribes the president of Suriname, his followers are addicted to drugs, and he murdered In-goo's best friend for no good reason. But his willingness to stick with In-goo's scheme for as long as he has makes Pastor Jeon seem uncharacteristically patient, and not especially dangerous. Observe how a whole new subplot pops up regarding one of those poor cult children, mainly because In-goo can't really plausibly claim to believe his own life is in danger anymore.