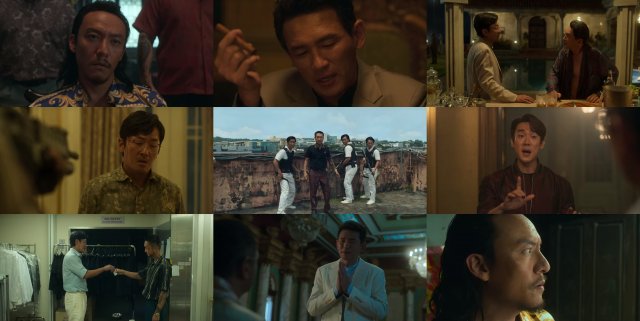 Jang Chen (played by Chang Chen) is the ethnically Chinese gang leader who manages meth sales from Suriname to Europe. Despite being listed in promotional materials as a special appearance, Jang Chen is the fourth most important character after the leads. This episode starts with Pastor Choi negotiating a deal with Jang Chen to sell all the cocaine he's collected for the increasingly abortive South Korean deal. Further conflict revolves around In-goo convincing Jang Chen to try and double cross Pastor Choi instead.

It remains a mystery to me why anyone listens to In-goo, since he's a novice to all this drug trade stuff and disaster follows him wherever he goes. The crucial piece of evidence that In-goo utilizes against Jang Chen is a picture of Pastor Choi's drug farm, which he hopes to use to cut Jang Chen out of the drug industry altogether. My first thought, much like Jang Chen's, was that a random phone picture doesn't prove anything.

My second thought was that Jang Chen works in distribution, and Pastor Choi coming up with a new supply of drugs doesn't really sound like a reason to turn against him. Despite In-goo constantly talking business, none of the logic in "Narco-Saints" seems to make much sense from a business standpoint. Jang Chen actually seems surprised when Pastor Choi calls in a favor from the military to get the cocaine back, when this has surely been the main reason Jang Chen has avoided antagonizing Pastor Choi this entire time.

Granted, Jang Chen wasn't exactly introduced as a very farsighted character. When we first meet him in the first episode he extorts In-goo for an unreasonable amount of money over the skate export business. I'm wondering now whether Jang Chen had just assumed at the time that In-goo was using the skate business as a front to export drugs. That would explain Jang Chen's willingness to believe in In-goo's competence, but not why Pastor Choi does so.

On the flip side, Pastor Choi has had a mole in his upper command this entire time apparently. I think this was actually mentioned at one point, but so briefly that I forgot about it. I think my main issue with "Narco-Saints" is one of presentation. The characters are all presented as if they know what they're doing, yet in execution their plans are haphazard and disastrous. In the already over-saturated drug war genre, this is a difficult flaw to overlook.