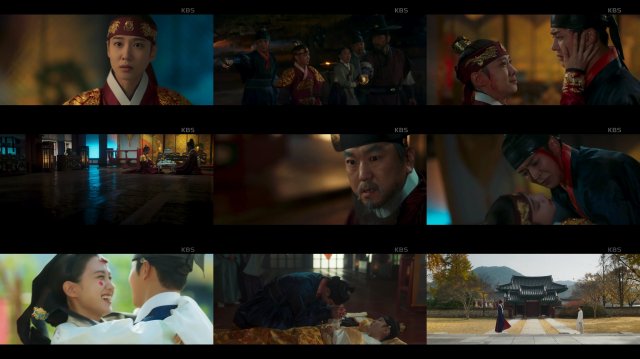 Grandpa Han, despite being credibly accused of treason, teams up with Scion Lee's end of the royal family to essentially force a coup d'etat entirely on the strength of Grandpa Han's allegation that King Lee is a woman. While this is true, the accusation is much less serious than Grandpa Han's being charged with regicide. Moreover, the main evidence proving the crown prince's twin sister ever existed implicates Grandpa Han in the coverup. He was the only person who had a motive to even do a cover up.

Such is the usual mess of the royal conspiracy plotline. For all his obsession with having a direct blood relative on the throne, Grandpa Han did a rather poor job of trying to have an actual familial relationship with Crown Prince Lee. His teaming up with Scion Lee's siblings is baffling, as these people were his chief rivals over the entire drama. Why they need Grandpa Han at all is a bit unclear. It's in their best interest to smear him as the mastermind.

How big is Grandpa Han's private army anyway? Do the royal cousins also have a private army or just the loyalty of the regular army? The mechanics of the civil war are as vague as they are brief. But it's irrelevant anyway. All of this set-up is just to provide an exit strategy for a happy ending, whereby King Lee can stop being king and live happily ever after with Scholar Jeong. Which I can't fault. Their romantic chemistry is the core of the story's appeal.

Where I can fault "The King's Affection" is that their relationship has never been as much in focus as I would have liked. The poorly structured and often absurd political storyline takes up nearly all of the energy, and still manages to skip important steps. Character deaths and motivations that actually matter are glossed over to deal with armies that teleport practically out of nowhere.

The script itself practically acknowledges this, with a brief dream sequence of an alternate version of the story where our heroine is just a princess who dresses up as her twin brother sometimes. I would have much rather had a drama like that, with more of an emphasis on the social elements of palace intrigue. Here there's just a whole lot of gruesome murder of people until we're out of named characters that can pick fights with the heroes, which just isn't very satisfying at all.