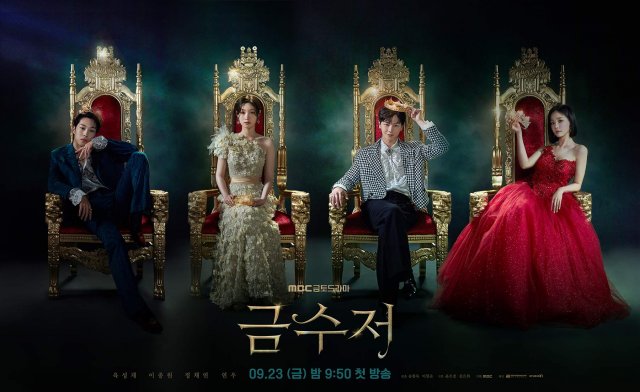 On paper, "The Golden Spoon" is nothing all that impressive. The new drama features a generally untested cast in a premise with a difficult concept. The titular "The Golden Spoon" is a magical device allowing a young poor man played by Yook Sung-jae to swap places with a rich one played by Lee Jong-won-I. Neither lead actor is that well-known. "The Golden Spoon" certainly faced lower expectations than "Big Mouth" which was its predecessor that ended with ratings of 13.7% on September 17th.

As usual, the reasons for any drama's success is aesthetic and arbitrary. But the advantage "The Golden Spoon" holds is likely in its fusion of genres, combining fantasy elements with those of class conflict and soap operas but with a relatively realistic approach. Bombast has been the trend as of late with South Korean dramas in regards to class issues, with "Squid Game" and "The Penthouse" standing out as recent, explicit examples of this sort of criticism.

But "The Golden Spoon" has a gentler approach, depicting characters who are merely aspirational, rather than actively trying to hurt themselves or others in the pursuit of wealth and power. This is more of an underdog theme than one of explicit social criticism and indeed, it's probably not coincidental that "Big Mouth" also framed itself as an underdog story, albeit of the thriller variety. "The Golden Spoon" expects the viewer to hope for the success of its heroes rather than the failure of its villains.

The positive tone is likewise uplifted by the relatively unknown cast, who like their characters, are trying hard to succeed in a tough world of television dramas. This allows for a healthy state of competition between the major networks, who compared to a few years ago, are far more likely to rely on strong scripts rather than easily pitched concepts. Consequently a positive present day bears good tiding for the future of South Korean dramas.