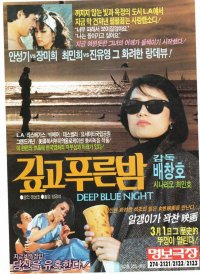 Synopsis
Baek Ho-bin dreams of succeeding in the U.S. He enters an arranged marriage with Je-in to get a green card. Je-in had been feeling isolated from American society. To her, Ho-bin's love is like a ray of light, her last chance. Finally, Ho-bin passes the strict interview by the immigration office and he is eligible to become an American citizen. However, as the arranged marriage is about to come to an end, Ho-bin's ambition starts to collide with Je-in's love. Finally, Ho-bin's secret is out. His mad violence explodes and he steps all over Je-in. Ho-bin and Je-in take off on a farewell trip. In the desert, human ambition and love burns hotly as they make love and then die.