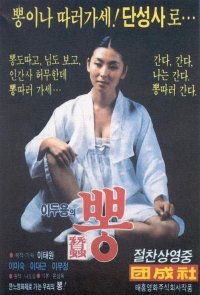 Synopsis
It is mid 1920s when everyone did not have enough to eat. There was a village called Yong-dam near a mountain in the southern part of the country. In the village lived a woman of unsurpassed beauty named Ahn-hyeop. Her husband was a gambler who would wander around the country looking for places where he could just waste his time and money. He would return home once every several months. His life was just like wind flowing over here and there. Because her husband would not bring money or take care of his family, Ahn-hyeop sells her body to men in the village to put food on the table. There are divergent opinions in the village over the rudeness and slutty nature of Ahn-hyeop but no one dares to kick her out since almost every man in the village has slept with her. But there is just one man who she wouldn't sleep with. His name is Sam-dol. He is a strong and greedy bastard who serves the granny, Ahn-hyeop's landlady. Sam-dol works with Ahn-hyeop collecting mulberries and is crazy about laying his hands over her sexy body. He tries everything including threatening and begging her. But she would never allow Sam-dol near her even though she slept with that weak man with lung disease. Eventually, Sam-dol builds a grudge against Ahn-hyeop and tells on her slutty behavior to her husband Sam-bo when he returns to the village. But he ends up being beaten to death by Sam-bo. Then Sam-bo begins to beat his wife. Both the husband beating the wife and wife being beaten up by her husband shed tears of greates. (Reference : Korean Film Archive)

View all 13 pictures for "Mulberry"